Less than a week ago North Korea held an “election” for the Supreme People’s Assembly. Amazingly, 99.99% of citizens participated, up from 99.97% in 2014. Every candidate on the ballot claimed overwhelming victory because voters were only given a single predetermined option. Meanwhile, an equally dubious vote was about to take place across the Pacific.

With similarities abounding, one key difference in the two votes could be noted. The theme had shifted from that of Rocket Man to RocketBallz. Yes, the vote America had been waiting all winter for, The Players Championship… *whoops* …THE PLAYERS Championship “Fan Vote Friday.”

In January of 2019 the PGA Tour announced a multi-year agreement with Twitter which would include a weekly Twitter poll allowing users to select which group was featured during the Friday stream. The Tour released this statement:

“In a nod to the PGA TOUR’s Fans’ First initiative, the TOUR is launching Fan Vote Fridays, giving fans the chance to vote, via Twitter to determine one of the two Featured Groups that will be showcased during Friday’s coverage…”

Since the inception of FVF, golf’s new podcast darlings and favorite odd couple from The Shotgun Start, Andy Johnson & Brendan Porath, have repeatedly ridiculed this poll as being contrived. As they’ve pointed out, the Tour strategically stacks the threesome options with one clear choice and litters the remaining options with groups like Jonas Blixt, Jhonattan Vegas and Adam Scott. That was an actual choice against Matt Kuchar, Bryson DeChambeau and Jon Rahm… Jonas freaking Blixt! You get the picture. The Tour has already decided which group they are going to feature and is offering the vote as a disingenuous attempt to claim fan engagement and participation.

As the Tour’s premier event, THE PLAYERS garners a lot of attention and the suits in Ponte Vedra had no intentions of making the outcome of this FVF even remotely in question. The choices were as follows: 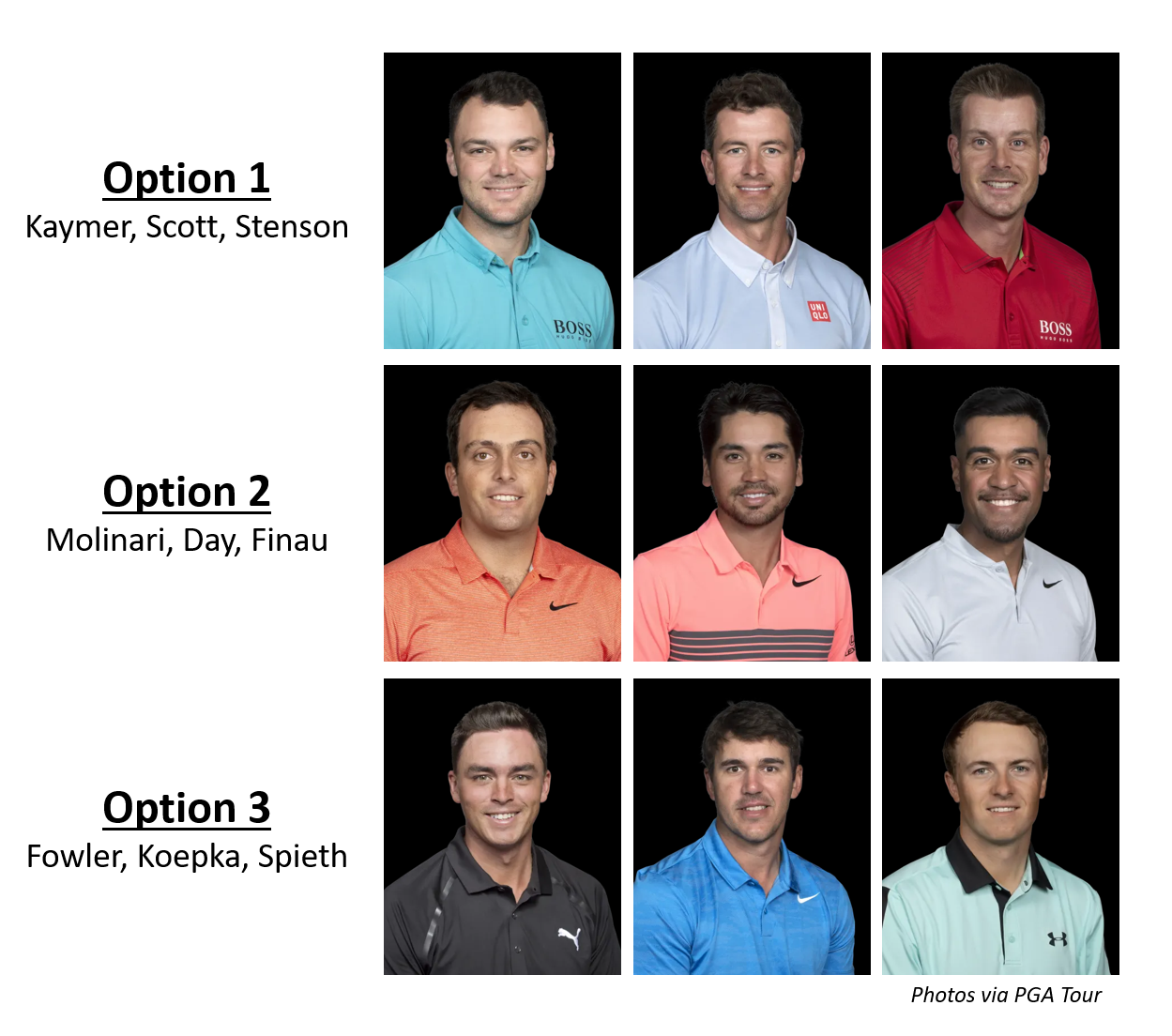 Group 3 of Fowler, Koepka and Spieth were clearly the best option and if we’re all being honest, this is who should’ve been chosen. HOWEVAH. Things changed on Wednesday morning when Brendan and Andy dispatched a call to action asking the at-large golf twitter community to stand up and to put an end to this unscrupulous “fan vote” charade. Audio of the discussion from The Shotgun Start is below:

The response from the growing new-age golf community was swift and impactful. What once started out as a +50% deficit quickly started to narrow in large part due to the support of fellow heavy hitters including No Laying Up, Kyle Porter, The Fried Egg

The race quickly tightened to around 8-9% behind the premier group and with nearly 17 hours remaining in the vote it appeared that the revolt would almost certainly succeed. At this point my optimism turned sharply into pessimism when I took a closer look at the voting numbers. At 9:57pm EST there were 11,609 votes; vastly overshadowing the previous Fan Vote Friday tallies. Could it be because this is THE PLAYERS and engagement was that much greater? Possibly. The more likely explanation is that the Tour had caught wind of the movement and systematic tampering was now in place to drive the desired outcome. Porath even prophesied the expected conclusion in saying…

“There is absolutely no way [the tour allows it]. Jay Monahan himself will cook the books to make sure that Stenson and Kaymer don’t beat Rickie and Spieth.”

To be fair, the Tour was in a VERY bad spot here with only two potential outcomes, if handled transparently.

They could leverage some form of voting technology or overseas click farm which would alter the voting results and force the Fowler / Spieth / Koepka group to win. In doing so they would avoid the disaster of showing the undesirable group and save face by not having to expose their media campaign as completely disingenuous. On the final day of voting a sudden shift occurred and the Kaymer / Stenson / Scott group got a Monster boost pulling out in front by 10%. A major 😉 shift in the overnight numbers.

Many were speculating (including myself) that the Tour would find some way to alter the results in the closing minutes and lift the true premier group back on top and close out the victory. Shockingly, this didn’t happen. The uprising succeeded and the group of comparative misfits took home the crown by a notable margin. 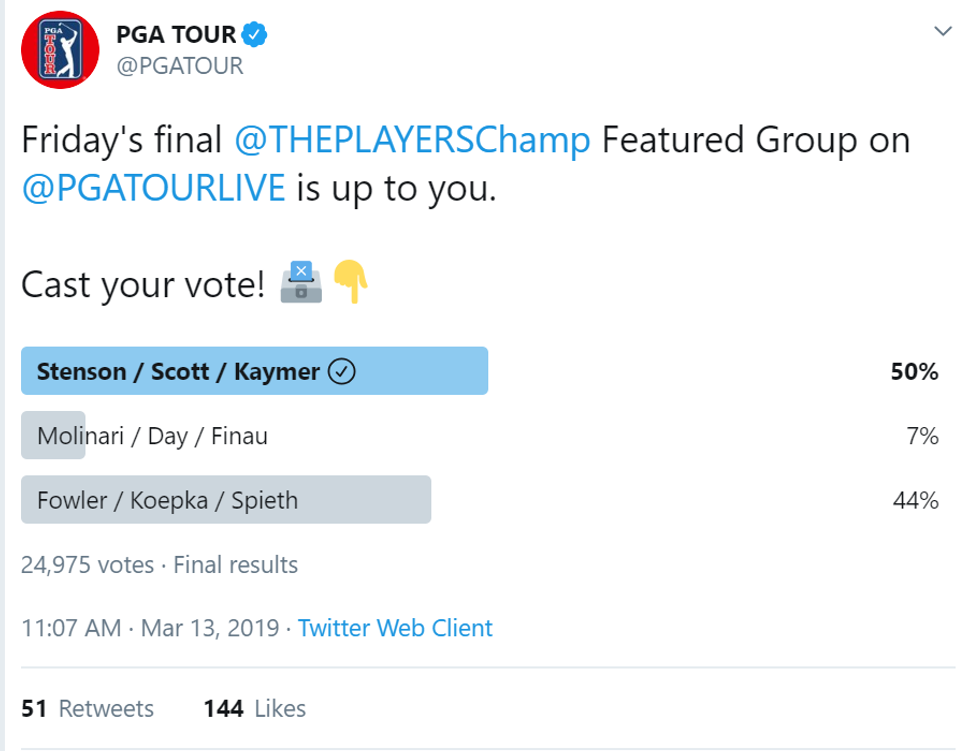 Many could characterize this outcome as silly and inconsequential. They wouldn’t be wrong. Ultimately, this was about something bigger than watching Martin Kaymer’s shiny biceps. It sends a message to the Tour’s media group that their most hardcore fans do not enjoy being insulted by their historically piss-poor social content and concepts. More importantly it finally answers the question of whether or not “Golf Twitter” has a voice worth listening to and if they do, is it influential? The answer is a resounding yes. This entire saga was fascinating to watch and I commend Andy, Brendan and all the other blue checks who joined in for having the balls to so publicly stand up to the Tour.

With all of that being said, I have little doubt that there was tampering in the voting process. We’re unlikely to find a shred of evidence to corroborate that statement but the statistics are very strong proof that something highly unusual was going on behind the scenes. Prior Fan Vote Friday vote counts pale in comparison to the votes received this week.

The final count from the Sawgrass Fan Vote Friday was 24,795. That’s a 135% increase over the last 5 votes combined. Here’s the stat that will tell you that something insidious was likely happening behind the scenes. The Fowler / Koepka / Spieth group received 44% of this week’s vote which equates to 10,909 votes. A single group garnered more votes than the entire Florida swing from the last 3 weeks by two thousand votes? The same group also collected more ballots than 4 of the previous 5 weeks combined. A case could be made for a separate silent majority fighting back against the social media rebels but based on the replies to the original poll that argument holds little to no water.