With the WGC Mexico no longer interrupting the Florida swing, we enter a month-long tour of “The Sunshine State.” Ironically, Florida is only the 10th sunniest state in the country, making the nickname equally as regrettable as those which accompany a set of holes on a golf course. The Honda Classic at PGA National now holds the panhandle’s leadoff spot which means one thing, prepare to be bludgeoned to death with the phrase “Bear Trap.” The blight of the hole moniker is once again upon us.

Over the last 20-30 years it has become popular to designate a group of holes with some type of catchy, unnerving moniker. These vomitous marketing ploys have infected countless American golf courses and the scourge is likely too far gone to reverse. One of the more egregious examples can be found just outside our nation’s capital on Greg Norman’s course at Lansdowne Resort. Holes 5 – 9 tip out at 1,760 yards which (un)coincidentally is the exact measurement of a geographic mile. These holes are referred to as “The Hardest Mile in Golf.” The integrity of the course design was compromised just so they could create a phrase. Sad! [The course also sits on a literal swamp. Insert swamp drain joke here.]

It would be impossible to determine how many courses have unceremoniously assigned monikers and installed plaques proclaiming the triumvirate of greatness you are about to embark upon. Ultimately, they’re nothing more than a tragically oversold cliche which can be propagated on Instagram and broadcast coverage.

Origin: There is no official declaration on when or where “The Bear Trap” originated. In 2002, PGA National tragically put a $4M renovation under the direction of Jack Nicklaus and the PGA Tour began playing an official event on the course in 2007. Miraculously, a giant bear statue and plaque showed up on the 15th tee box only a year later. Jack claims he never intended for the holes to be named after him and a “resort guest” created it, but I’m sure he didn’t mind the shrine they built with his signature and namesake. The best part of the plaque is the portion which states “Three Great Finishing Holes On The PGA Tour.” They knew enough not to claim the holes are the best finish on Tour. Instead, they opted to simply tell you that they are in fact great and just in case you didn’t know… the PGA Tour plays here. 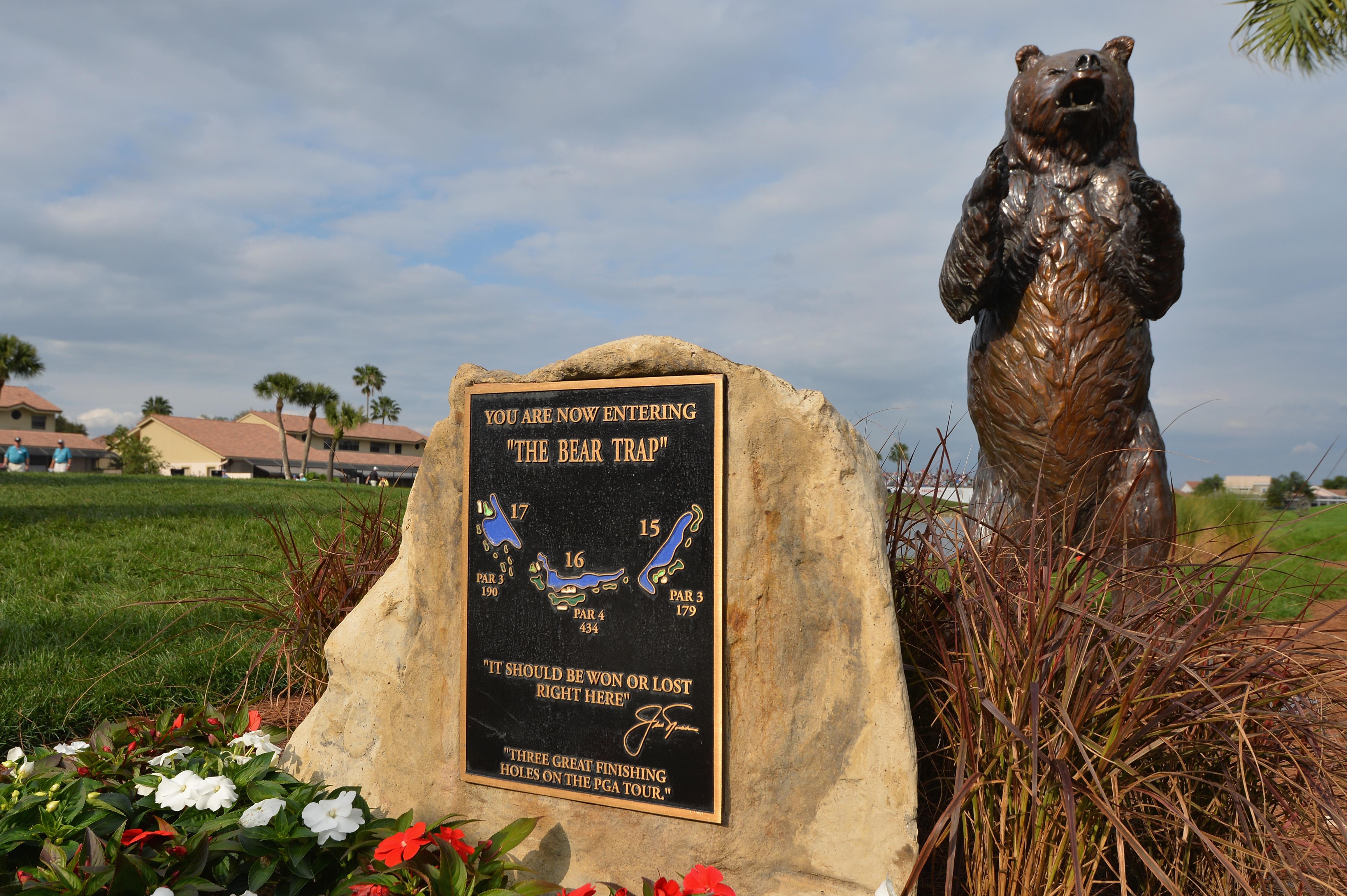 The 15th hole is statistically the most difficult of the three, despite the relatively benign distance. Wind consistently plays a major factor on this par three over water. There is no room for error to hit it short or right. To increase the mental anguish, the tee box is set directly at the edge of the lake to boost the already high intimidation factor. The only bail out spot on this hole is to the left of the green, but you still have to get it there through the cross-wind. From 2007 – 2015, the lake collected 468 balls during the tournament. The par three 17th in comparison only claimed victim to 300. 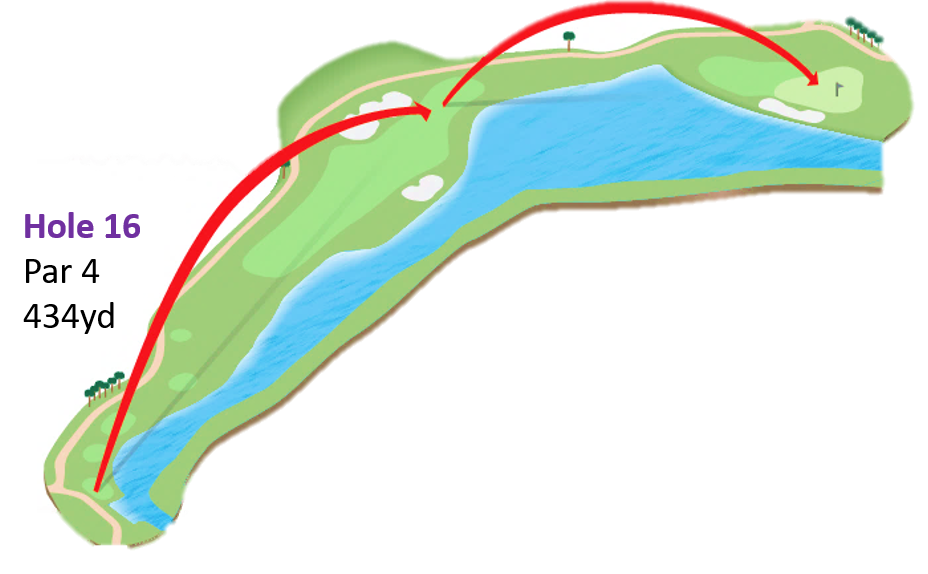 The 16th hole won’t require exceptional distance, but keeps water in play for both the tee and approach shots. Most players will hit less than driver from the box to get the ball safely in play and ensure a clean lie for the water carry approach shot. Compared to the other two holes, the 16th strikes less fear in players. Keep the ball in the short grass and don’t miss the approach to an uphill green short or right. Pretty straight forward. 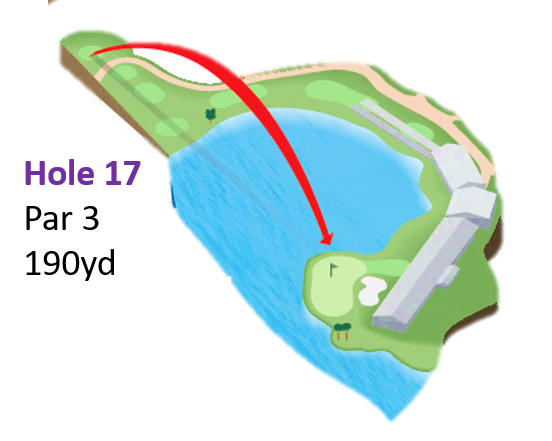 The final hole of The Bear Trap is where things can get very interesting, especially on Sunday. This 190yd par three can be quite precarious in a strong wind. Add nerves into the equation and nothing is guaranteed. The front of the green drops off very sharply into the water. The rough on the steep bank could hold a ball but the severity of the slope nearly ensures that anything which toys with the front edge finds a resting place in the murky drink. If you play it safe and go above the hole you risk finding the bunker or rough which bring the hazard back into play for your second shot. Many tour players have stated this hole is more difficult than the 15th, but the numbers don’t lie. 15 is statistically more shots above par than 17.

Not comprehensive. [Amen Corner has received an exemption from scorn]

Origin: “The Green Mile” has an interesting story which was inspired by an unlikely source. In 2004, a radio caller proposed the idea on a sports talk show. The name stuck and it has been “The Green Mile” ever since. CBS ensured that we all got a heavy dose of the moniker during the 2017 PGA Championship.

The par three 17th requires a long carry off the tee over the lake to a green which floats on the edge of the water. My lasting memory of this hole will be Justin Thomas on the 71st hole of the PGA Championship. With a very narrow lead, he stepped up and stuffed it to about 10 feet with the pin hanging on the left edge of the green like an absolute SAVAGE. He could’ve played safe and gone to the right. Instead he went for the kill, collected his birdie and first major championship.

Origin: One of the most famous finishes in the game with unsettled controversy over who created “The Gauntlet.” Former Tour Commissioner Deane Beman is officially credited with the phrase after he used it on a 2008 broadcast. However, journalist Tim McDonald claims to have coined the term in an article years prior. Would anyone be surprised if the Tour lifted the name and claimed it for themselves? Don’t count on it. While it’s very fitting, thankfully this moniker isn’t used as heavily as some others such as The Snake Pit and aforementioned Bear Trap.

This is a classic Cape Design Template hole from the legendary Pete Dye. The tee shot requires extreme precision to land in the very narrow sliver of fairway which is beyond the diagonal water carry. Miss to the left and double bogey is a near guarantee. In 2015, the eighteenth hole played on average 0.397 shots over par. Unfortunately, most players choose to bail out in the right rough just short of the trees to avoid water off the tee. This leaves a risky angle and potentially obstructed path to the green for the approach. Many players leave their second shot short from there to minimize the risk of running through the fairway into the water. This is one of the most difficult finishing holes in all of golf.

Origin: Golf journalist and editor David Barrett coined the phrase in 1992 while editing an article for golf architect Tom Doak, suggesting the title “Cliffs of Doom”. Much like the Sawgrass moniker, this doesn’t get too much exposure. A place like Pebble is too magnificent to allow some cheese doodle moniker to overshadow the rest of the course.

The 8th at Pebble is the start of the “Cliffs of Doom”, although some claim it goes from 6-10. The eighth hole is a relatively short par 4 which plays long because of the expansive chasm between the landing area and green. From the tee, you want to get as close to the edge as possible without going over. The fairway slopes toward the ocean, encouraging a left-to-right miss into the water. A max tee shot of 225yds still leaves you with 200yds over the vast cove into a heavily sloped and bunkered green. In the 2018 Pebble Pro-Am this was the most difficult hole averaging 0.28 shots over par, yielding only 18 birdies and 72 bogeys or worse. 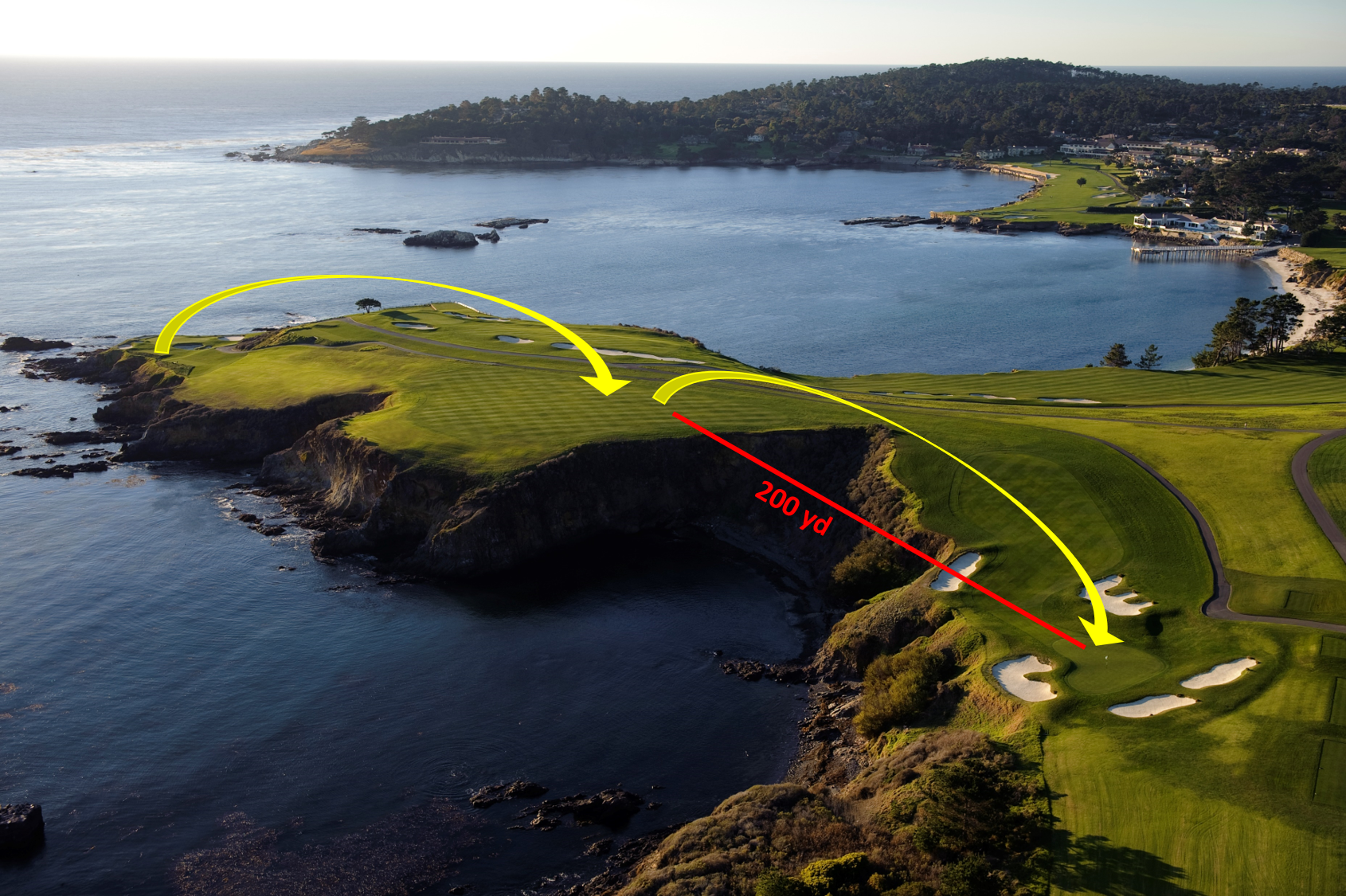 Origin: You probably haven’t heard of “The Den of Satan”. That’s because its an exclusive Outside The Cut creation. I recently played Pete Dye’s Stadium Course at PGA West and never in my life have I hated a golf course with such passion. Pete Dye was instructed to “make the toughest damn course in the world” and he unquestionably succeeded. My primary issue with this course is that it is difficult and tricked up for the sake of being difficult and tricked up.  In contrast, Bethpage Black is brutally difficult but still fun to play and fair. Nothing about this PGA West course fits the natural landscape of the desert. It’s covered in Dye moguls and littered with water at every turn. Tour players literally signed a petition to stop playing the course in 1988 and the tour did not return until 2015.

The par five 16th hole at PGA West is an absolute beast. It plays 600yds and has bunker left of the green so deep that it might actually reach all the way down to the pits of hell. 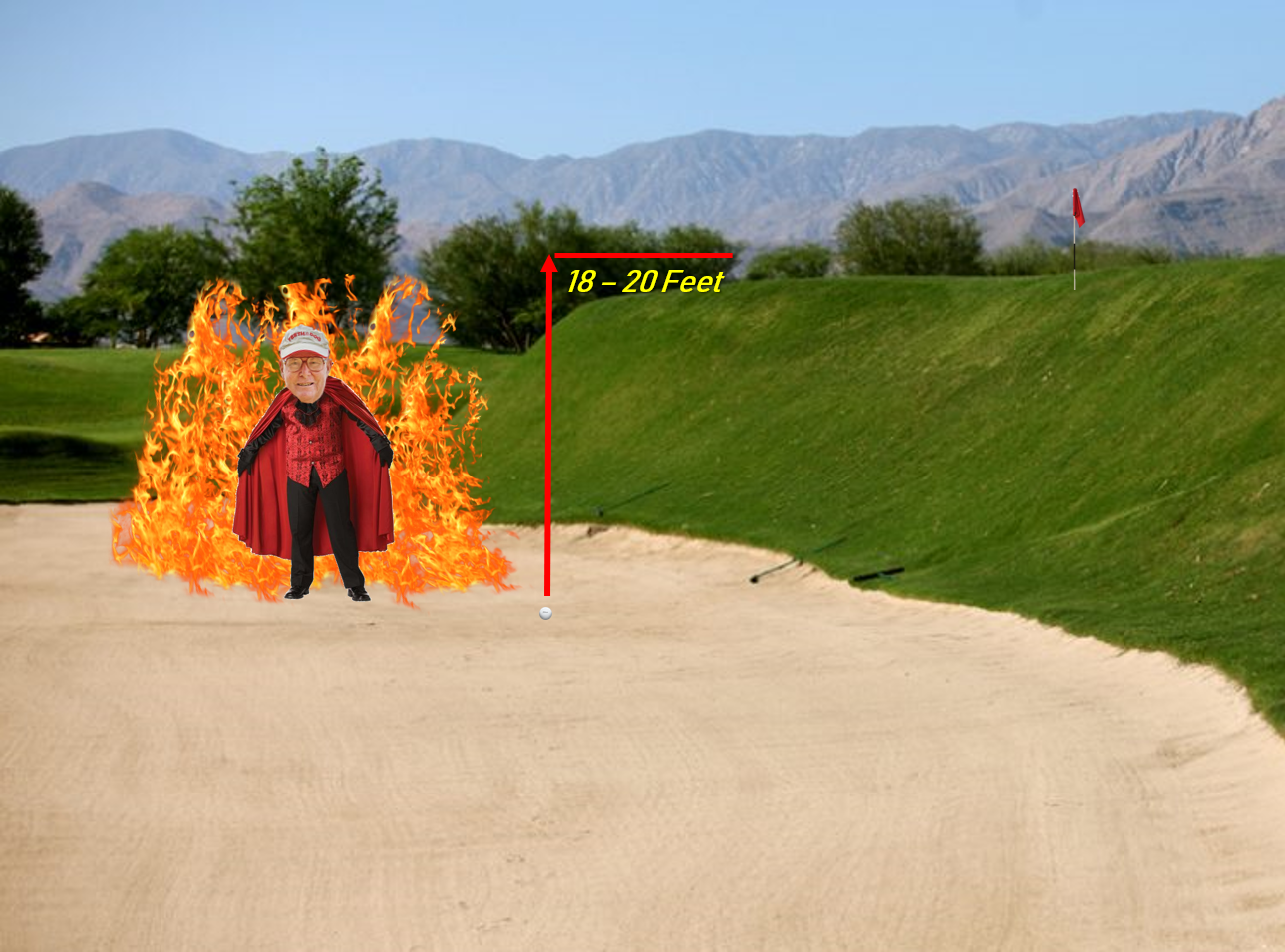